Ox here, from Dry Fire Training Cards. If you haven’t seen American Sniper yet, it’s an awesome movie and I strongly encourage you to see it.

Here’s a quick TV interview that my friend, Retired Navy SEAL, Larry Yatch recently did about his tour on Team 3 with Chris and about the movie:

I got to spend some time with Larry in Vegas at SHOT last week and we had a chance to swap stories about Chris. To be clear, we had very different relationships with Chris. Larry went to war with Chris and they were close friends/brothers.

I felt an instant kinship with Chris when I met him, thought the world of him when he was alive, and was devastated when he died, but I feel like it would be less than honorable to call him a “close friend” because of the lack of time that I spent with him.

One thing Larry and I both noticed is that Chris was much more jovial in real life than in the movie. One example was from the party below. 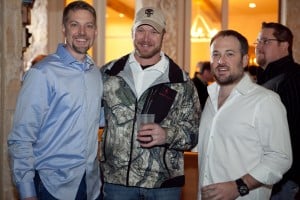 me, Chris, and Dillard

We were standing in the kitchen talking at 1-2 in the morning and a guy who was there because his girlfriend was invited came in and asked Chris for some of his snuff.

Chris told him something along the lines of “you don’t ask a guy for his last bit of dip”, but the guy was insistent. So Chris made him a deal he didn’t think he’d accept. Most people wouldn’t understand or appreciate what happened next, but the simple version of the story is that the guy ended up unconscious for a few seconds, swallowing his dip, and spending the next half hour in the bathroom puking until his girlfriend dragged him home. Good times :)

Shortly after his death, Glenn Beck auctioned off his signed copy of American Sniper and raised $16,000 for Chris’ wife, Taya. As soon as I heard this, I got in touch with Glenn, sent him a copy Chris had signed for me, and we raised another $16,000 for Taya.

This week, Larry did a series of 4 fundraisers in Minneapolis. Larry, Eric Davis (former instructor at the SEAL Sniper School) and one or more other SEALs (depending on the night) hosted a $75/seat fundraiser/showing of American Sniper. They gave presentation on BUD/S and the SEALs before the movie, showed the movie, and then did a question and answer session afterwards. Last I talked with Larry, they were on track to sell all 1,000 seats and raise $75,000! Proceeds will go to support Chris Kyle’s family. If you’re a former SEAL and would like to do something similar, let me know.

For more information on retired Navy SEAL, Larry Yatch and the Concealed Carry Masters Course, go >HERE< We’ll be donating 20% of sales through this link to Chris Kyle’s family along with the proceeds from the movie showings. I’m excited and proud to tell you that we’ve raised $1,600 this week so far for Taya and the kids through this offer.

Some people have asked why I am not supporting other charities. It’s a valid question with 2 answers:

So, please help us honor Chris’ memory and support his family by purchasing the Concealed Carry Masters Course DVD set from retired Navy SEAL, Larry Yatch by going >HERE< and getting it today.