For Less Than The Cost Of A Box Of Practice Ammo!

The Most Time-Efficient, Money-Saving Way In The World To Become A “Master Marksman” (With Any Gun) 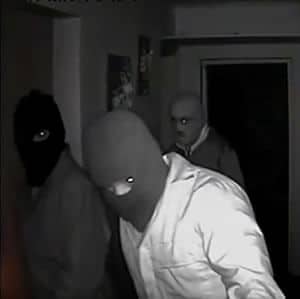 Whether you are slinging lead down range or defending your family agains home invaders, your ability to ACCURATELY put rounds on target is all that matters.

What if I told you that there is a way to do exactly that... Shoot 300% better when it really counts.

But I bet you think it sounds too good to be true?  Don't worry.  I would too.  And that’s why I think it’s important that you hear what my customers…from newbie shooters to decorated special operations shooters…have to say about the training I’m about to share with you.

If you’re not deeply involved in the tactical and defensive shooting world, you may not realize that the man who was behind the best selling book “Tactical Firearms Training Secrets” and the creator of Dry Fire Fit, is a gentleman who goes by the name, “Ox.”

You can always tell the guys at the range who dry fire—they perform at a level that seems impossible to mere mortals.

That’s because when you dry fire, you’re practicing everything up to the point where the weapon goes “bang.”

In other words, all of the factors that determine where the bullet goes! (Once you hear the “bang,” the outcome is already fixed.)

And in the next few minutes, you’ll learn how to make that kind elite performance a reality for yourself…quickly and inexpensively.

Whether you have a micro-compact pocket pistol or a super-accurate $3,000 race gun, the biggest opportunity for improvement in your speed and accuracy is what YOU do up to the point where the trigger releases and the firing pin strikes the primer.

The great news is that with dry fire you can train everything up to the point where your weapon goes “bang” without the distraction of the gun going off, or the cost and time commitment involved with high-volume live fire training.

But the simple fact is that the excited anticipation of the gun going “bang”… and the resulting kinetic effect on what the bullet hits… can easily distract you from the solid fundamentals you need to shoot fast, tight, accurate groups.

Dry fire lets you focus on the fundamentals…

Fundamentals can help you impress your friends, keep tight groupings and even win competitions if that’s your thing.

Dry fire is widely recognized as the most effective, but…strangely…least used, firearms training technique known to man. Militaries around the globe, special operations units, (including ALL of the Tier I units like Delta and Team 6), Olympic shooters, and champion competition shooters have been successfully using dry fire training for decades.What’s more, Dry fire completely eliminates the obstacles of time and money so that you canmaintain and improve your shooting skills at home to whatever level you choose.

To be fair, I’ve trained with dozens of high end instructors across the country and most of them preach the benefits of dry fire. But they don’t tell their students how to dry fire, or even give them the tools or a proven program to follow.

In fact, out of 30+ instructors that I’ve trained with, only one sent us home the first night with snap caps, a regimen to follow, and instructions not to come back if we didn’t practice. (I’ll share his contact information with you in a bit.)

Most of the rest leave it up to the student to figure out on their own.

Let me give you an example of a shooter named “Tommy.”

Tommy went to a $1,000, 5-day course where he trained with a cadre of incredible instructors and shot 3,000 rounds. At the end of the 5 days, his skills were sharp and he felt like he could have taken down Bin Laden in his compound all by himself.

Tommy went home and remembered that his instructors told him he needed to dry fire to retain his skills, so he practiced shooting bad guys on his TV a few times with an empty weapon—but that got boring pretty fast.

So, Tommy went online in search of dry fire exercises and spent the next 4 hours looking at an assortment of articles and videos that each showed 2 or 3 techniques apiece…most of which overlapped what the others already showed.

In the end, after spending all that time “researching” the free stuff on the internet, Tommy had 4-5 new drills to do, but he got bored with them within a week, stopped doing dry fire training, and his skills from his high dollar class petered out over the next few weeks.

By the time he shot with his friends again, his skills were barely better than before the course and all he had left were a cool cap, a high-speed shirt, a bumper sticker and some happy memories of his high-dollar, high-speed training course.

Just like Tommy, most people don’t dry fire (or stop dry firing) because they don’t know what to do or they get bored with the process really fast.

They know that dry fire is the single most effective tool to take them from where they are now to where they want to be as a shooter… they just don’t know how.

To be clear, it’s not the instructors’ fault–they’ve got an oppressively small amount of time to convey a lifetime of lessons and experience.

And that’s why I created Dry Fire Training Cards… 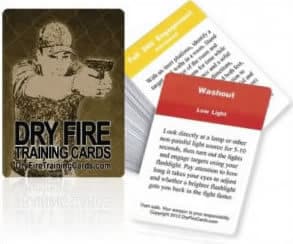 Dry fire is the simplest, easiest, and quickest tool for turbocharging your shooting.

Even if you’ve heard of it before from an instructor or a buddy, maybe you brushed it off as a “fad.”

Perhaps you just didn’t see the fun in it…

…or maybe you just thought it took a lot of time.

As an instructor, all I can say is no, no and heck no.

You see, there’s a reason…

…all use dry fire.

If The Most Accurate
Shooters Are Using This Secret…
Why Wouldn’t You?

This special stand-alone dry fire drills book includes detailed descriptions that go beyond what can fit on the cards. It will show you: 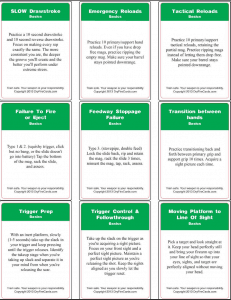 Obviously what you want is the professionally printed deck of Dry Fire Training Drills – since you can just put them in your pocket, glove box, backpack or laptop case and take them with you wherever you go.

However, with this bonus you’ll get a printable version of the cards so that you can print the drills off and start practicing immediately – that way you won’t even have to wait for your real cards to arrive in the mail! 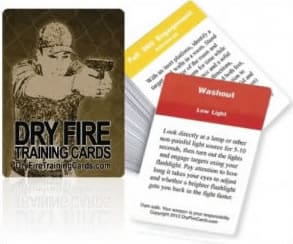 Put Rounds On Target FASTER & MORE ACCURATELY Than Ever Before

These drills have been proven to work by the apex of elite shooters and the ONLY way that you won’t shoot better after getting Dry Fire Training Cards is if you make the choice to refuse to train.

And, actually, if you’re the kind of weak-willed person who might roll over, give up, not use the cards, and then say they don’t work and ask for a refund, then please don’t waste your time or mine by buying them in the first place.

But, since you’re the type of person who values firearms training enough to read this far, I think it’s safe to say that you and I are cut from the same cloth.

YES! I want to shoot faster, tighter, and more accurate groups and take advantage of your $17 $7 special offer.

Here’s what you do to order… Have your MasterCard, American Express or Visa ready and click the big yellow button below to continue and pick your quantity…